The Uganda Equator Line : An Equator is the intersection of a sphere’s surface with the plane perpendicular to the sphere’s axis of rotation and midway between the poles. This is the most recognized landmark on the map of Uganda. it is the major latitude that divides the world into two equal hemispheres, that is, northern hemisphere and the southern hemisphere. The equator is perpendicular to the earth’s axis of rotation and it also contains the earth’s center of mass also seen on maps marking the equidistant from the North and south Pole. Uganda is one of the few countries in the world with the imaginary line that divides the earth into two half passes. The intersection of the earth’s surface with the plane perpendicular to the earth’s axis of rotation and containing the earth’s center of mass is what sometimes referred to as the equator as by the Wikipedia. A magnetic needle has no dip and stabilizes in perfect horizontal position along the imaginary line of the equator and here you are also able to stand with one of your feet in the Northern hemisphere and the other in the southern hemisphere at this point; it is such an amazing experience to stand at both sides of the world. The sun rises and falls rather so fast at the equator, with equal days and nights’ length. And also, you find that the people around the equator experience only warm temperatures and tropical climate throughout the year and therefore it is not that easy to tell the difference between seasons. Average annual temperatures in equatorial lowlands are around 31⁰C (88⁰F) during the afternoon and 23⁰C (73⁰F) around sunrise. 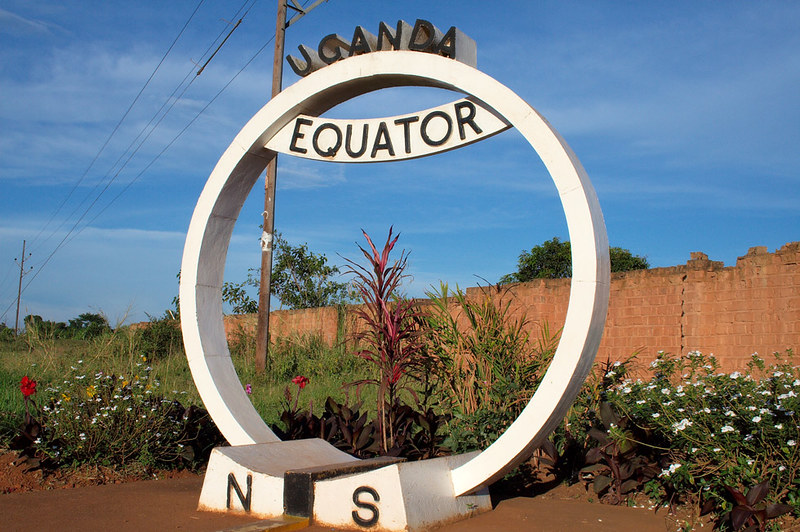 In Uganda, the equator is located in Kayabwe, Mpigi District, about 72 kilometers from Kampala city, the capital of Uganda. The Equator or the Uganda equator crosses into Uganda at a point situated 75km south of Kampala along the Kampala-Masaka Road which is 420 kilometers from Kampala city. You will find the poster for the Uganda Equator on Kampala-Masaka Road where everyone who gets there experiences warm temperatures while at the Equator. In the cycle of Earth’s seasons, the equatorial plane runs through the sun twice per year on the equinoxes in March and September. To a person on Earth, the sun appears to travel above the equator (or along the celestial equator) at these times. Light rays from the Sun’s center are perpendicular to Earth’s axis is perpendicular to the point of solar noon on the equator. At the Equinoxes, the Earth’s axis is perpendicular to the sun rather than tilted toward or away, meaning that day and night are both about 12 hours along across the whole of the Earth.

How does water swirl in opposite directions at the difference spheres at the Equator?

Is it true that one is lighter while at the equator?

What Souvenirs can l get at the Equator?

It is such an exceptional experience done by clients who visit the equator; so, do not forget to carry along a souvenir for your family, friends and relatives on your way back home. A good number of structures have been set up around the area of the equator with so many amazing and attractive crafts and art pieces from the craft shops. You will probably find many amazing and attractive products from the gallery antique and that of Aid child gallery. You can also buy branded T ‘shirts with expressions like “I have crossed the equator”, not forgetting to enjoy the tasty meal and coffee at one of the restaurants there.

How do I get to the Equator?

While you begin your journey from Kampala city, you will drive for approximately 1hr 30mins at a distance of 72 kilometers to Kayabwe in Mpigi District along Kampala Masaka Road.

What other places are crossed by the Equator in Uganda?

Some of the places Uganda crossed by the Equator include; Lwaji Isand: It takes approximately 25 minutes to get to Lake Victoria’s Lwaji Island. The winds blow mildly as the lake’s water is tranquil. Lake Victoria, Entebbe’s Aero Beach and Queen Elizabeth National Park: the Equator monument is located in Kasese district in the southwest region of Uganda which sits on the warm temperature in Queen Elizabeth National Park and can be reached by road travel from southwest Kampala the city of seven hills Uganda’s largest capital city which is approximately 400 kilometers.